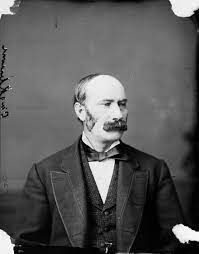 The Gravenhurst Heritage Committee will have a special ceremony in honour of the late Alexander Peter Cockburn, the pioneer that founded the tourism industry in Muskoka.

Cockburn, who first arrived in Muskoka from Orillia in 1865, fell in love with the area, saw the potential it had for tourism, and devoted his life to developing it. The new settlements that began six years prior to his arrival were struggling and the government was considering abandoning the area as Ojibwas native hunting ground.

Some of Cockburn’s efforts to develop the area included pushing the government to build more roads and improve navigation of locks and canals, and have the railway extended from Barrie to Gravenhurst, and built steamboats for freight, passengers, mail, and logs.

He promoted the area to the rest of the world through newspapers and guidebooks for tourists and sportsmen.

He developed the District from a population of 600 upon his arrival to 30,000 by his death in 1905, contributing to the growth of industries such as farming, lumber, resort hotels, and increasing the number of steamboats.

According to the Committee, people regarded him as “the Father of the Muskoka tourist industry,” and when he died a trainload of mourners attended his funeral.

Over time Cockburn was gradually forgotten, until recent years upon recognition in local history books, the revival of the R. M. S. Segwun that was originally one of his ships, a biography that will be released soon, and the Heritage Committee having the square in Gravenhurst harbour named in his honour.

The ceremony will take place on August 24, 2022, 2:30 p.m., and will include honouring Cockburn, and a commemoration of the proud era of the lake steamers, which, according to the Committee, “are like a trademark for Muskoka for over one and a half centuries.”

The Committee is anticipating a large attendance, and looks forward to seeing the public and representatives from all of the towns and townships there.