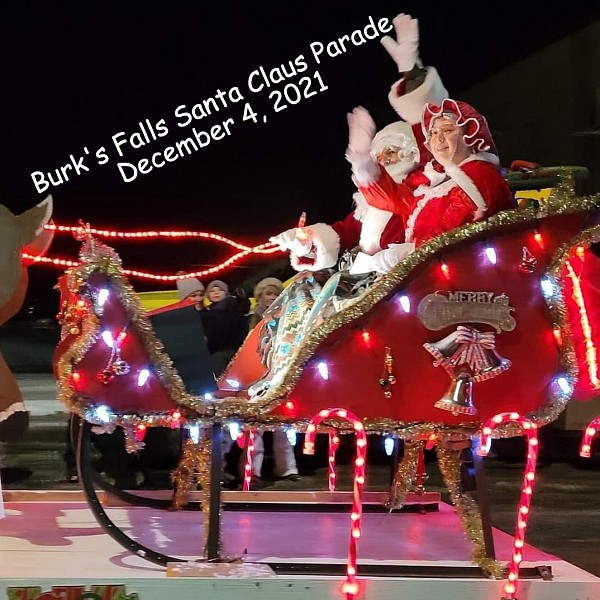 On Saturday evening, I attended the Burk’s Falls Santa Claus Parade for the first time in a few years. COVID-19 forced the cancellation in 2020 of the beloved parade down Ontario Street. It was refreshing to see and hear the enthusiastic attendees, especially the little ones. Clearly, there is a pent-up demand for those holiday celebrations, and that parade felt wonderful. For about 45 minutes, I soaked up some of the innocent wonder and excitement of the little rug rats anticipating their fleeting glimpse of the main elf himself. Sure enough, Santa rolled in for the grand finale and, with Mrs. Claus at his side and Rudolph and the gang towing his sleigh, he made his cameo appearance. All in all, I thought it was an excellent parade, including 27+ Christmas light-bedecked floats, emergency vehicles, heavy equipment, and sirens blaring, marchers in costume, dogs in costume, candy cane distributors, and the enthusiastic participation of a town full of onlookers. There may be bigger parades out there, with fancier, more elaborate floats, but I think Burk’s Falls rates near the top of the scale for Christmas spirit and goodwill. My hat goes off to all the organizers and volunteers responsible for making that parade such a success. It certainly lifted my spirits, especially when all the news from the outside world is grim. Ever the roving reporter for Hunters Bay Radio, I live-streamed the event and posted it on the Hunters Bay Radio Facebook page. When I last checked, there were over 6,700 views, so apparently, I’m not the only one who needed a good parade.

Since the pandemic emerged, and we all became a little more closed off, I’ve been writing a great deal, but most of it results in crumpled pieces of paper in the wastebasket. In my head, I’ve been composing a collection of songs to reflect my mixed feelings about the pandemic, strung together by a common, peaceful melodic theme. Hard as it has been to ignore the drek on social media and the endless barrage of negative press; the school shootings, the issues surrounding climate change, the disinformation and politicization involving a deadly virus, the increasingly abominable behavior by our so-called leaders, and the omnipresent uncertainty about what the future has in store, I remain hopeful that “this too shall pass.” Over the past 18 months, I have written 3 songs that are hopeful and upbeat. Those are two adjectives I don’t usually use to describe my songwriting. I am working to create an album of 8-10 songs in drop G, with melody lines that are peaceful and calming. It’s a work in progress, and the message of this collection of songs can best be summed up in a line from one of the finished songs, “Better”:
I don’t have the magic answer,
I just want to do some good before I go,
I don’t want to feel so helpless,
And love’s the only remedy I know.”

Last night, we lit the eighth and final candle for this year's Chanukah celebration. I’ve always appreciated the story, though like so many religious stories, it may be a myth. I love watching candlelight, and on the seventh night, I sat transfixed by the flickering candles as they petered out. As I always do, I let the candles on our beautiful menorah burn down until they self-extinguished. Seven candles eventually went out, but the eighth, the "Shammash" (the attendant or helper candle that is used to kindle the other lights each night), remained burning long after the others had gone out. I timed it, and it burned for at least another 12 minutes. There was no apparent reason for that, yet there it was, a tiny flame remaining lit long after I expected it to burn out. Maybe it was nothing, but I choose to consider it a sign. We don’t know what’s coming, and while there is the understandable inclination to feel trepidation, sometimes all we have is hope. That Santa parade was that undying flame for me, and it made me realize that regardless of all the trouble in the world, most people want nothing more than a little peace, goodwill, good health, and happiness. If you missed the Burk's Falls Santa Claus Parade, you can watch it here:  https://www.facebook.com/huntersbayradio/videos/438150291244368
(Photo of Santa & Mrs. Claus courtesy of the Burk's Falls Santa Claus Parade Facebook page)

Peel Regional Police have concluded their investigation into a incident at ...

Police Nab Driver For Impaired After Leaving The Road

Bracebridge OPP responded to a concern from a member of the public on Sunda...

Due to snow squalls expected across the region buses are cancelled for Brit...

“Roll with the Punches.” How Local Restaurants Are Making It through the Lockdowns

Letter To The Editor: Why Do We Still Have Vaccine Passports?

Wednesday FEBRUARY 9th will be MURDER!!