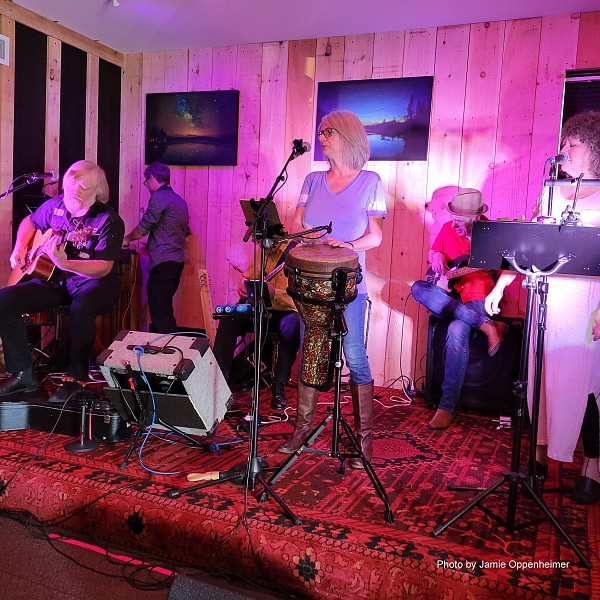 Years ago, and shortly after Shauna Leigh and I were married, we attended our one and only PINK FLOYD concert, at the CNE concert venue. It was 1994, and the tour was to promote their most recent album to date, “The Division Bell”. The tickets were part of a wedding present from Shauna’s late brother, Dean Jordan Taylor, he sat beside us at the venue and those seats were excellent; centre stage and a few rows back. Once an employee of Ballard’s production company CPI in Toronto, Jordan was no stranger to big concert venues. Jordan had been involved in many Pink Floyd tours and, among other things, had put together all-inclusive concert packages for Pink Floyd concerts across North America. I grew up listening to “The Dark Side Of The Moon” (who didn’t?), and was familiar with four or five of their albums, but I was not well versed in Pink Floyd’s complete catalogue. Attending that concert in ‘94, I became a much bigger fan of theirs. It was one of the best concerts I have ever attended; the stage production, the sound, the lighting, and the live performances were all spectacular. I feel fortunate to have seen the band before they disbanded.

Many months ago, I was recording one of my original songs with my friend Sean Cotton in his studio in Burk’s Falls, and he told me he was in rehearsal for a Pink Floyd show he was producing. I knew most of the musicians in the band who would be backing him, and I was intrigued. Covering Pink Floyd songs is a daunting task, but Sean has a great track record for entertaining audiences. A month or so ago, while attending a CD release party with my friend and former Hunters Bay Radio “LIVE DRIVE” show host Silver Lake Joe Thompson, he raved about seeing Sean’s ACOUSTIC FLOYD show at the Canvas Brewery in Huntsville. I was sorry to have missed it and thought it may have been my only chance to see the show. When Billy Stewart announced that the show would be coming to his new ALM Studio venue in Burk’s Falls, and asked me to open for the show, I eagerly agreed.

Last Friday night, it was with some trepidation that I took the stage to play my brief opening set. I played my songs, and was relieved to get off the stage and take in the show I came to hear. Clearly, there were others who had heard the buzz about the show, and the venue was sold out, thanks in part to my wife Shauna's excellent marketing skills. There were cottagers from Toronto, attendees from North Bay, and most of the tickets sold online were not from Burk’s Falls residents. Billy Stewart's venue, ABOUT LIVE MUSIC / ALM STUDIO, is an excellent spot to hear live music because the acoustics are wonderful, the ambience is warm and comfortable, and Billy's proficiency as a sound man ensures that the shows always sound great.

In a word, it was magic. Sean opened the show with only a mic and a piped-in acoustic accompaniment, as he sang an obscure Pink Floyd song that most would not recognize. There was polite applause, and then the ride began. The rest of the set was a full band revue of songs from Dark Side Of The Moon, including many recognizable audio clips from the album. The full band consisted of: Sean Cotton on acoustic guitar, lead vocals, and foot drumming; Tamica Herod and Elizabeth Anderson on lead/backing vocals and percussion; George Axon on lap steel and guitars; Chris Hess on saxophones, clarinet, bass, and lead/backing vocals; Michael "Lopez" Phillips (Mighty Lopez) on bass guitar, 12-string guitar, and accordion. The music and the vocal performances were spectacular, and there was a well-choreographed ebb and flow to the show. For about 2 hours, I felt as if I was listening to Pink Floyd live. In short, everyone in that audience was treated to a very well-performed revue of some of the band’s most iconic songs. The second half of the show featured a wide range of Floyd material, spanning their long and diverse career. I walked out of the ALM Studio buzzing. To Sean and his bandmates, you all nailed it and I thank you. You successfully conveyed the Pink Floyd experience, and replenished my live-music starved soul!