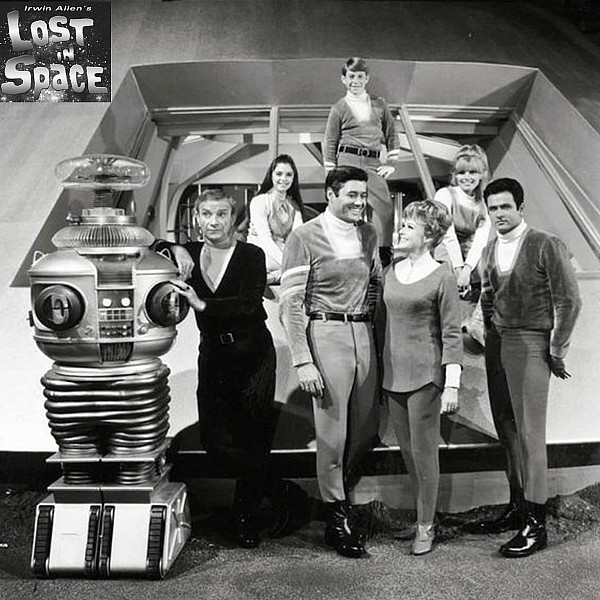 Reprised from 3/3/1996:
At 2am, while in a semi-comatose state, I was flipping around the dial for some golden nugget of late night television to watch, when I was rewarded with an episode of "Lost In Space." Have you ever watched that show? Before it was banished to the catacombs of really bad late night T.V., I used to watch "Lost In Space" a lot. Yeah, yeah, I know, get a life. I tell you, that is good stuff!

Last night's episode was, as usual, predictable, like "Voyage To The Bottom Of The Sea" shows, wherein Kowalski always gets turned into a sea monster, but never gets killed, perhaps because they needed him for the next show ... Dr. Smith, who is, in case you didn't know, a total jerk in every episode, once again endangered the whole family, this time by giving away one of their thrusters (no, not June Lockhart) to some bad guy from "Andy Of Mayberry", who played a careless miner and who, in the process of digging for cosmonium, which comes in a little bottle and looks like a urine sample, but which is really the essence of life as we know it, caused the planet to become unstable and to disintegrate. It was so funny I had tears streaming down my face.

Whoever dreamed this show up deserves, well, something. I haven't enjoyed T.V. that much in 10 years. The family spaceship looks like an overturned Tupperware dog dish. What happened anyway? Did they let the robot drive? The costumes are 1950's ski attire, and the robot, who, by the way, is my favorite character in the series, is a moody, wise-cracking, reconditioned gravity-feed furnace, with all-terrain treads for feet, a goofy big flat lightbulb for a head, flailing pool vacuum hoses for arms, who sounds like the guy who used to announce for Letterman, and who yells, "WARNING! WARNING!" a lot. The family pet is a moon chimp with furry antennae that look a little like they were ripped off a giraffe. Instead of making normal chimp noises, it bloops like a pot of thick chili turned up too high on the stove. They must have had a stunt chimp too, because in one scene, when the ground begins to shake, that ape is literally catapulted off the set. I wish I had taped it, because one second it was there, and the next, all I saw was an antenna and an arm at the other end of the screen. Let me tell you, that stunt monkey earned its bananas. I'd rather have Jackie Chan's job. And I think that chimp was Bubbles' mother (you've probably read about her torrid affair with Cheetah), which would explain A LOT of things.

The evil Dr. Zachary Smith is a truly complex character. A stowaway and unwanted guest aboard the big upside down dog dish, he flits about with Will Robinson, the little boy, and the robot, pining incessantly for Earth. The writers chose to make his character an effeminate coward, in addition to being evil and selfish. Of course, to complete the nasty, late 1960's stereotypes, there were three women who were total fluff heads; pretty, but too unskilled and frail to handle the heavy equipment and the fun-to-drive moon vehicles. Presumably, they styled their hair often, because it was always exactly the same in each show, even directly following a violent sandstorm. A critical aside: June Lockhart's hair looked much better on the "Lassie" show.

Whatever happened to the cast of "Lost In Space"? Are they still out there and lost? Maybe they can find that $460+ Million satellite NASA just lost. Maybe they've just faded into obscurity. Perhaps they're selling maps to the stars' houses.