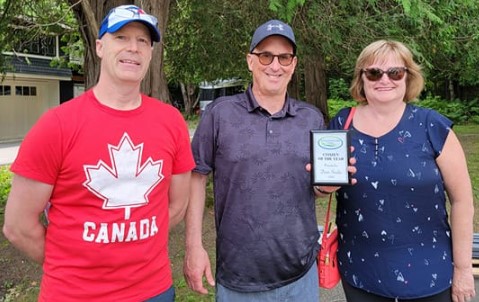 The Port Sydney Chamber of Commerce announced their citizen of the Year awards earlier this week.

Saying that because of the pandemic, they were not able to recognize publicly, the people  from the community who had made a significant contribution to the community, President Derek Watson-Brown and Vice President Brenda Murdoch announced the winners at Port Sydney Beach during the Canada Day BBQ hosted by the Port Sydney Parks and Recreation Group.

In 2020, the award went to an un-named group of individuals known as the “Rock Fairies” who placed hand painted messages of hope on rocks around the village.  In 2021 the award went to Barb Stillar, who was involved in many events at the Port Sydney Community Hall and the beach, helping to plan, run and clean up after events.

Entrepreneur Dean Smales took the award for 2022, who has been involved in the Stephenson Lions Club and Chamber.