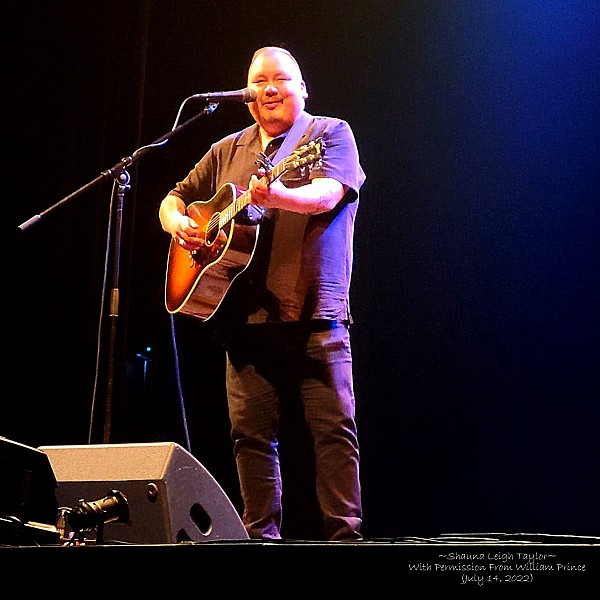 Shauna Leigh and I were fortunate to attend the William Prince concert at the Algonquin Theatre last Thursday night, and what a memorable night of beautiful music it was. One of the many excellent concerts scheduled for this summer by the Huntsville Festival Of The Arts (HFA), the multi-award-winning singer/songer played to a full house. From my observation, our fellow audience members left the show feeling better than when we arrived. It never ceases to amaze me that a musical artist can get up on stage, with just an acoustic instrument, and completely captivate his or her audience, but that is just what William Prince did.

I’d seen him perform several years earlier, when Scott Morrison and Buck Miller presented him at the Canvas Brewing Co., as part of their Intimate Concert Series. Regrettably, Shauna was not able to attend that show, but I knew that, should the Peguis First Nation, Manitoba-born William Prince, return to Huntsville, we had to see him together. Prior to that first concert, I was not all that familiar with his work. My main motivation for attending that event was to see Deb and Grant Nickalls’ son Jack Nickalls open the show, performing with his partner Josie Robinson. They were wonderful. What first impressed me about Prince’s performance was how he set up each song with personal, often self-deprecating anecdotes about his life. His songs are truly relatable and captivating, his music, and especially his rich baritone voice, are hypnotizing, but his patter is the glue that ties the show together. Like most of the songwriters I admire, his storytelling is exceptional. At that Canvas Brewing Co concert, during the intermission, Grant brought me backstage to meet the headliner, and I was immediately taken by his kindness and approachability. He was extremely generous with his praise of Jack and Josie, and he seemed to be a genuinely kind, caring, and humble soul.

Although he was playing to a much larger audience at the Algonquin Theatre July 14th, the performance felt very much as intimate as the one I’d attended at Canvas. As soon as he took the mic, I felt as if he was playing to a small audience in his living room. He put everyone at ease; he joked, he reminisced, and he offered some valuable lessons on life and connection. At one point, he playfully posed for all the members of the audience who were eager to get a cell phone photo, then gently requested that we all put our cell phones away and simply watch and listen to his performance. After receiving permission from him, Shauna was happy to shoot her one and only pic. Frankly, after the last several years, I have been so anxious and distracted, I find it harder and harder to be in the moment, but not that night. His music was soothing and deeply personal. He played a few new, unreleased songs, and shared some relatable stories about his personal journey. Apart from the beautiful music, what most impressed me about the man was his ability to connect, ... to everyone.

On that subject, he discussed his appreciation of gospel music. The irony was not lost on him, that he appreciated music born from a religion that had so abused his Indigenous brothers, sisters, and extended family. His message is that religion-based music is not the enemy, lack of communication is. He implored us all, as a species, to start the dialogue that will bring peace and healing to everyone, not only to the victims. This is something that I emphasize on my radio program, in my efforts to present music I enjoy. Music unites people. William Prince’s songs, both lyrically and musically, reflect the pain, the joy, the love, the acceptance, and the gratitude of a man who is constantly evolving into his best self. Sitting in the second row centre seats were Grant Nickalls with his son Jack, and at one point, it made Shauna and me so happy to hear Prince thanking Grant for playing his songs on Hunters Bay Radio, and he also gave Jack (and Josie) a shout-out. William Prince is truly a class act and as my late father-in-law, Dr. Sydney Taylor, would have said: "A prince of a guy."

Fifty volunteers in five communities across Parry Sound, Muskoka and the Al...